The history of the college gardens

In this article, first published in the 2020 issue of Observatory , Michael Pirie discusses the development of the college grounds over the past four decades. 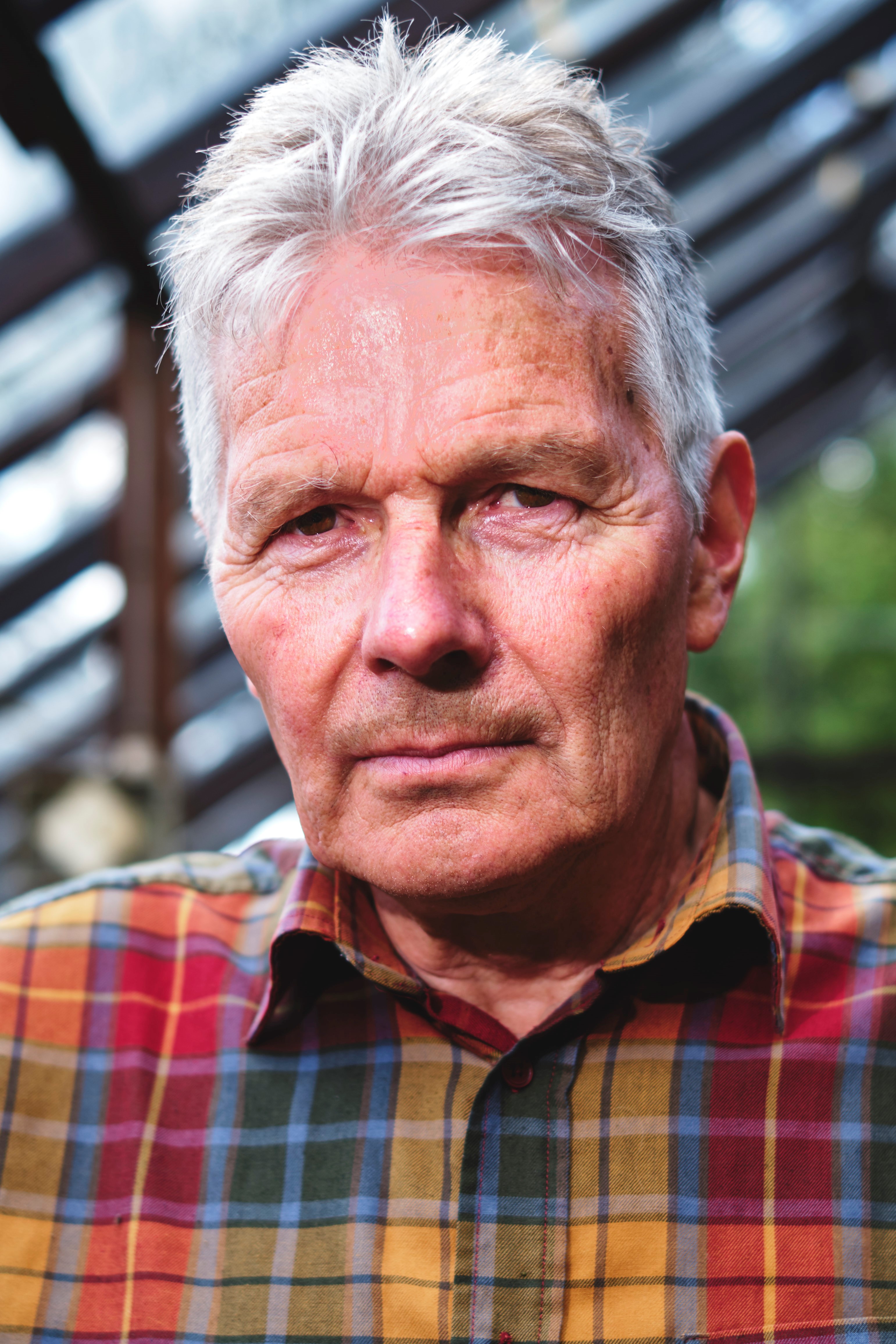 Michael, pictured in the greenhouse opposite the Radcliffe Observatory. Credit: Gifford Tan

I suppose you could take the start of my gardening career at the college as dating from 12 March 1980, with the first sentence of my job application: ‘If you have not already filled the vacancy, I wonder if you would consider this application for the post of a working gardener.’ It wasn’t a very strong application, not least because I didn’t (and don’t) have any qualifications in horticulture, but at the time it was sufficient to begin what has been a very consistent and satisfying employment.

Gardening is a creative pursuit that engages body and mind, and ideally is carried out with a maximum of autonomy and a minimum of reference to authority. I’m not sure if the powers that be would officially sanction my approach but that is pretty much what I have been doing for the past 40 years!

The main objective of the garden, as I see it, is to be aesthetically pleasing. There are many lesser objectives, such as assisting in the functionality of the college, but beauty is the primary one.

During the celebrations for the college’s 40th anniversary in September 2019 I was invited to give a talk on the development of the gardens, which I treated as a conducted tour starting in the Lankester Quad, such as I have done for real on many occasions. What follows is along the same lines.

Jack Lankester, Oxford University Surveyor at the time of the college’s foundation and its first architect, had to turn what was originally the stable yard or back entrance of the Observatory into something worthy of a front quadrangle. An idea of his transformation is shown by a comparison of these two photographs, the former from the 1920s, when the stables were used as a garage, the latter from c.1979 when the college had just opened:

First photo from the 1920s, when the stables were used as a garage, the latter from c.1979 when the college had just opened (acknowledgements Bodleian Library)

His concept was to design the entrance as though one was entering the courtyard of an 18th century country house with an estate clock over the archway – a very appropriate and elegant period touch. As you can see from the colour photo from 1979, used in an early set of postcards, the original planting was sparse and had no character.

The large expanse of limestone setts proved unstable and liable to disintegrate, so in 1998 I was asked to come up with some designs for an improved layout. Plan C (there was also a Plan A and Plan B), which allowed for new criss-crossing paths paved in York stone with stable-block engineering brick edgings, was the approved design: 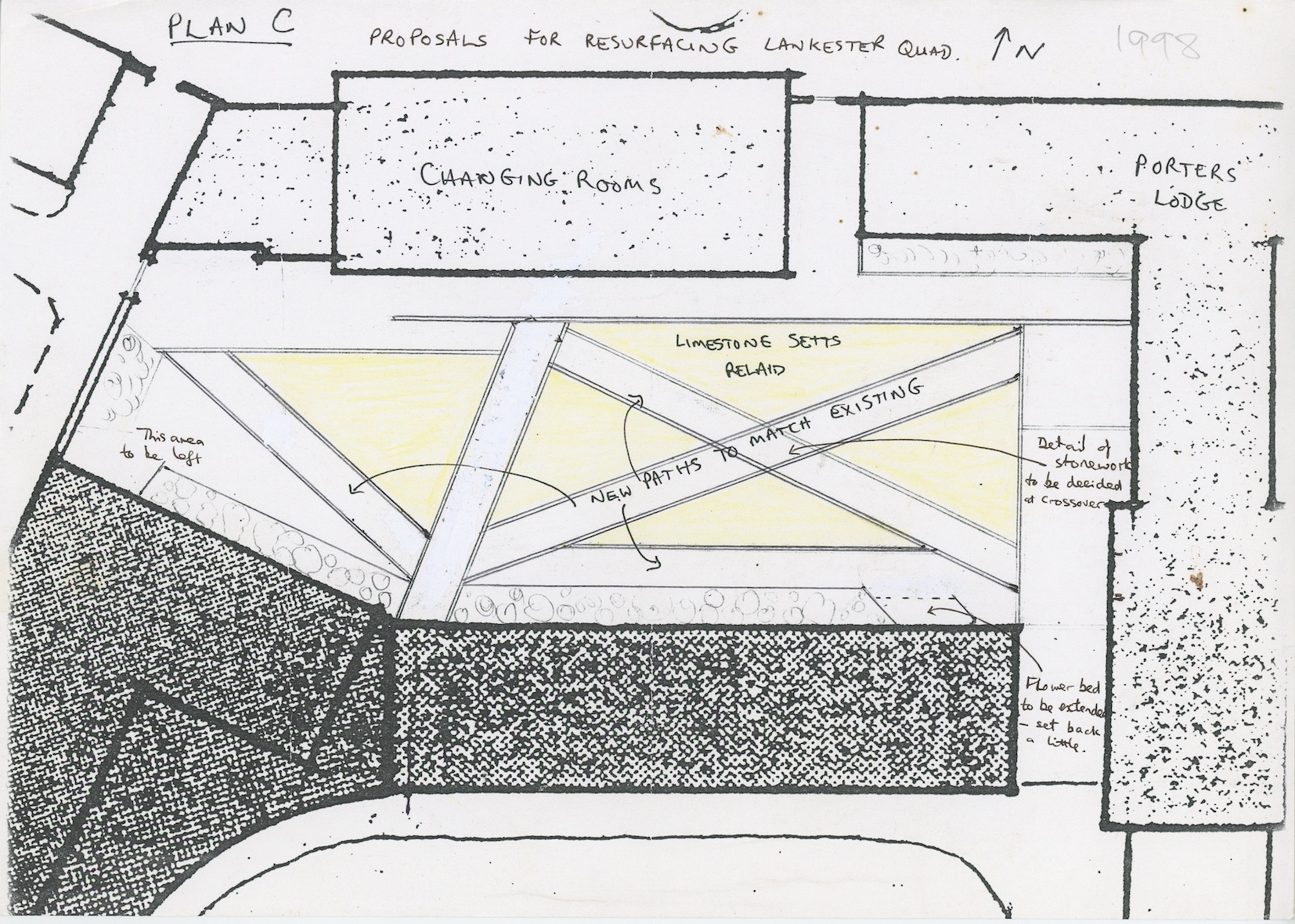 At the same time, I took the opportunity to completely replant the borders and give the buildings the clothed character that they currently possess. Jack Lankester’s archway was used as a convenient framing device in this photograph from 2004: 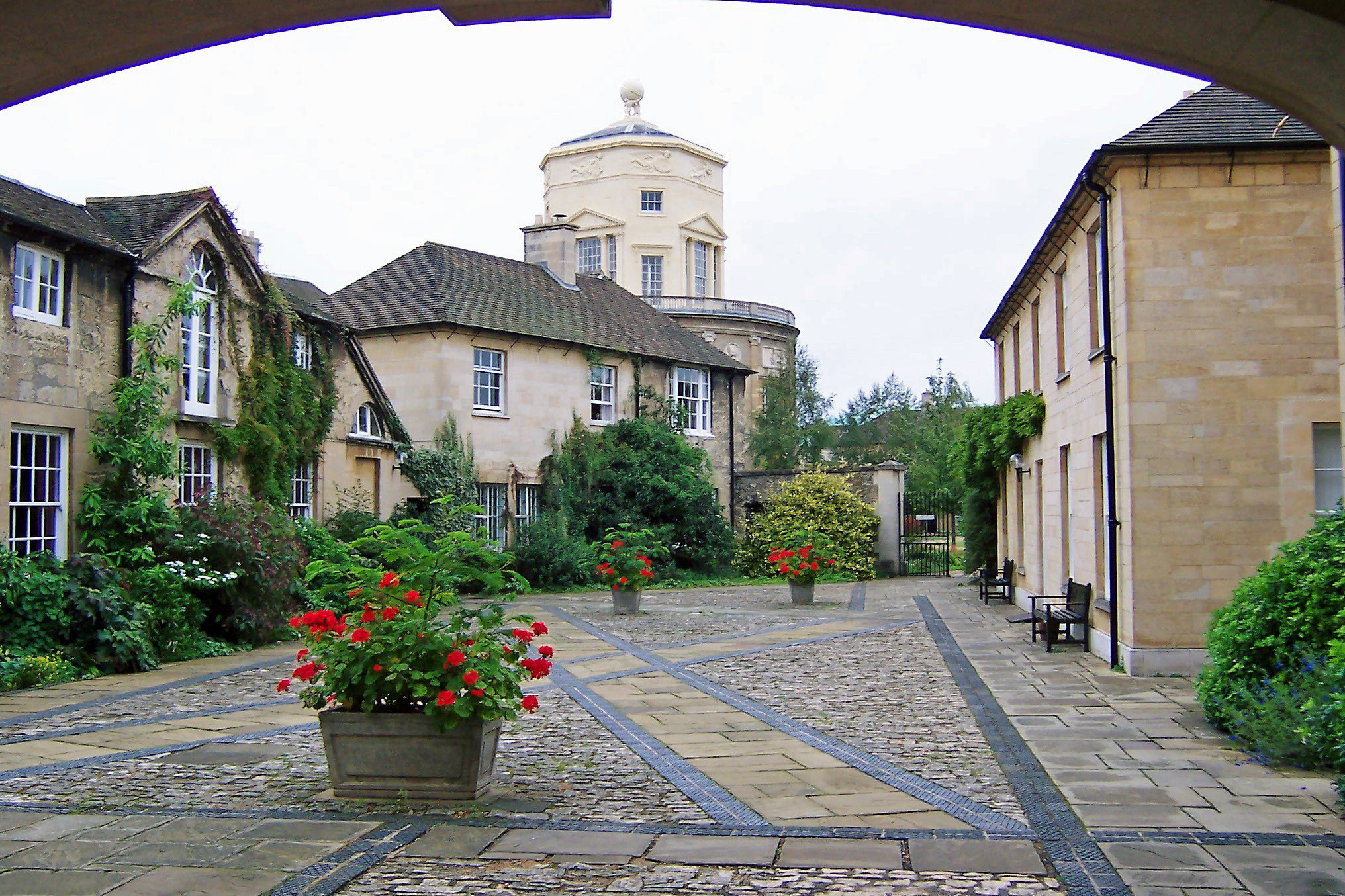 The stable yard originally had solid wooden gates separating it from the main garden (and from the Woodstock Road), indicating its purely utilitarian nature: 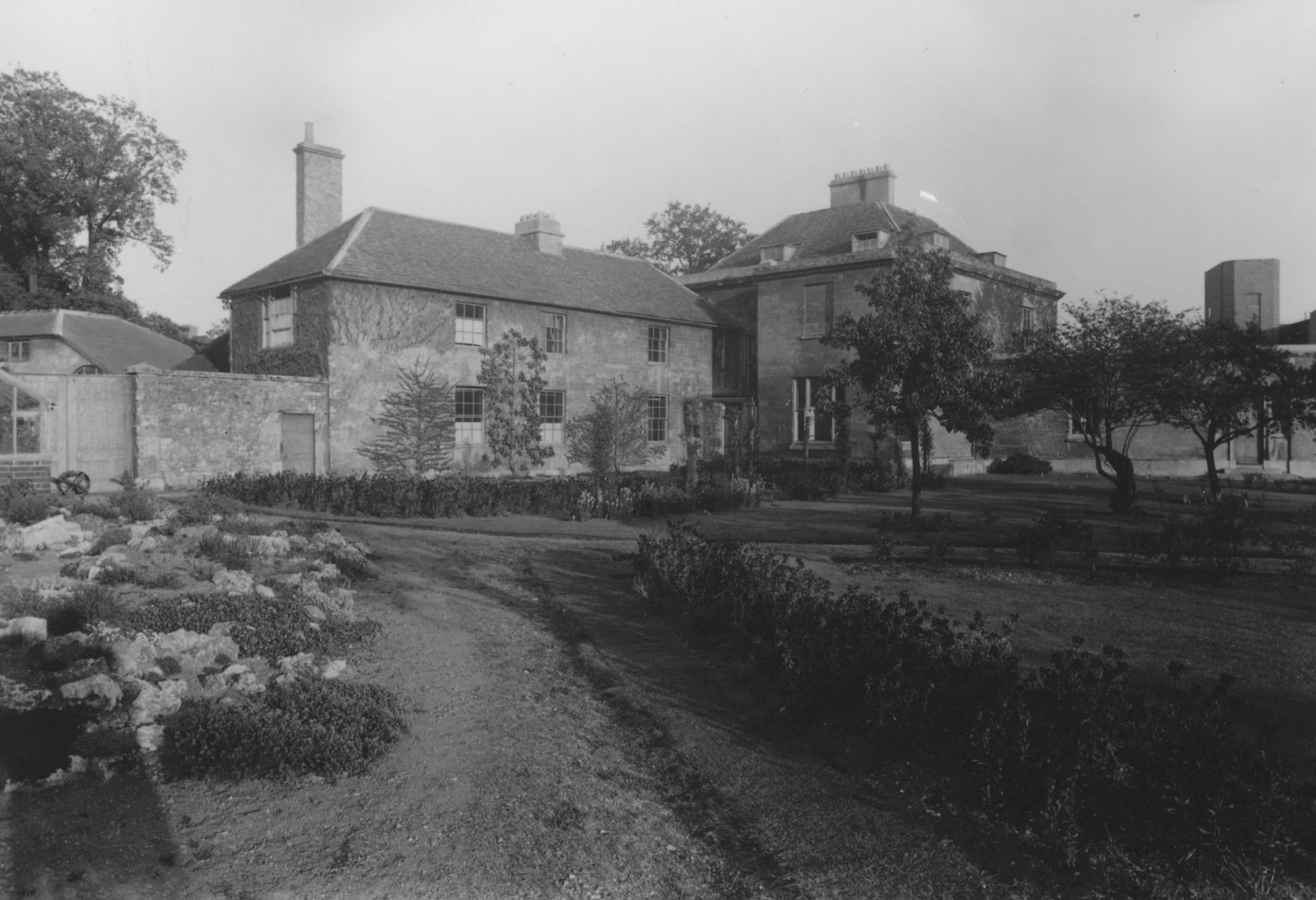 The transition from one space to the next through wrought iron gates seems so natural and desirable now, as to make the alteration go quite unnoticed.

The wisteria is a seasonal joy. It is supported across the opening by a shallow wrought iron arch, which was installed around 2000 to mimic the entrance archway.

One of the necessities in the main garden has been to create the areas of greatest interest alongside the most frequented paths – to the Observatory and Doll Building, and nowadays to the gym and Observatory Street.

The flower bed immediately through the gates from the Lankester Quad acts as a low foreground feature to the view of the Observatory. The planting has changed from time to time. There follow some distinctive efforts, starting with an astronomical garden created to coincide with the most recent transit of Venus across the face of the Sun in 2012:

A line of green parsley across the circular clump of yellow flowers in the foreground represents the transit (in case you were wondering).

In 2018 we re-created Green Templeton College’s heraldic crest in plants. The shield had been designed by the College of Arms in 2008, following the merger of Green College and Templeton College: 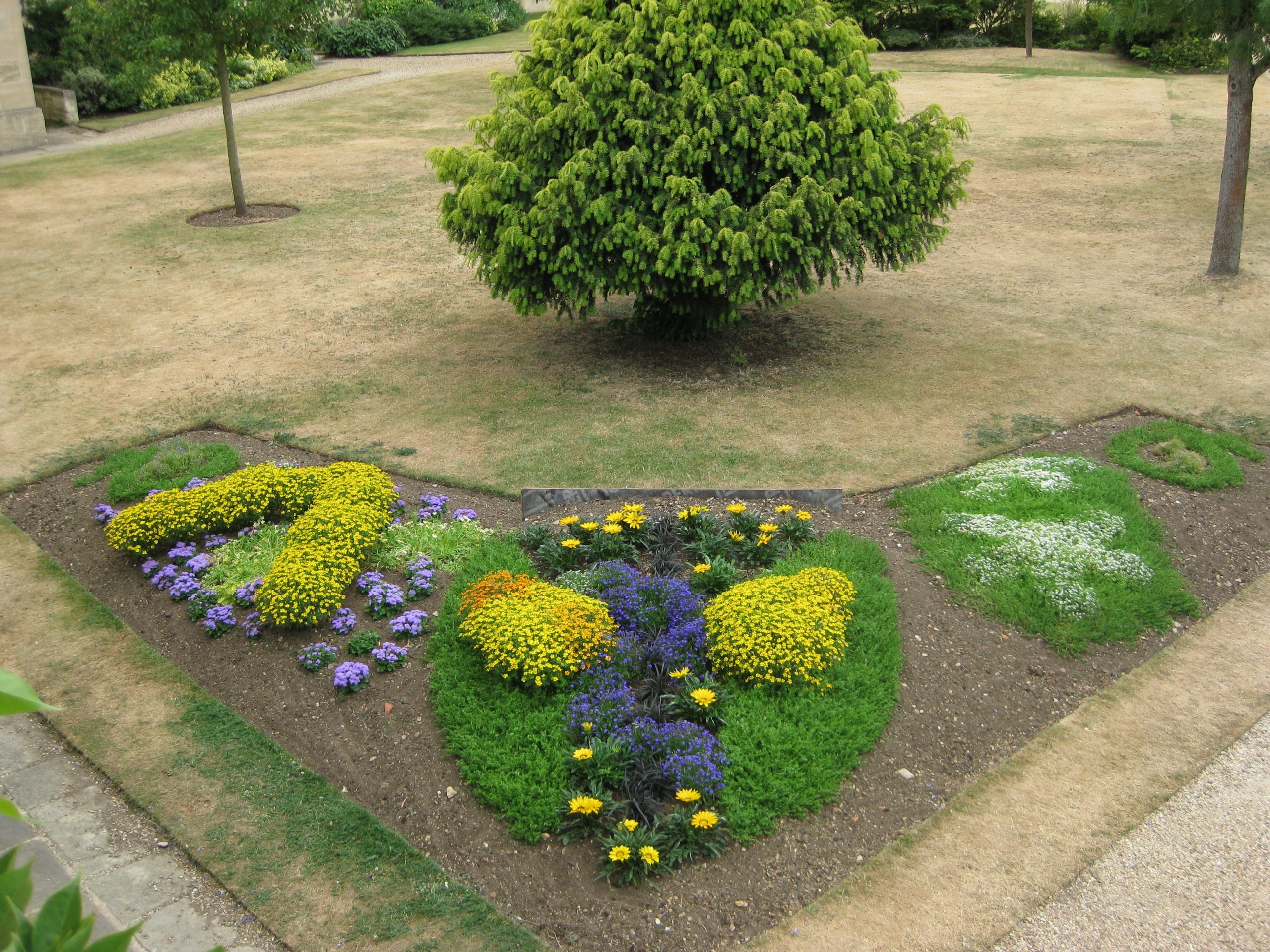 The snake in blue twined around a line of dark grass represents the medical symbol of Aesculapius (from Green College’s crest). It lies between the nautilus shells in yellow (and a bit of orange) from Templeton College’s crest, representing continuous growth.

Finally, in 2019, Assistant Gardener Carolyn Serra and I created a garden of ancient Greece, which incorporates some relics of Coade stone from the Observatory, with plants from the eastern Mediterranean. 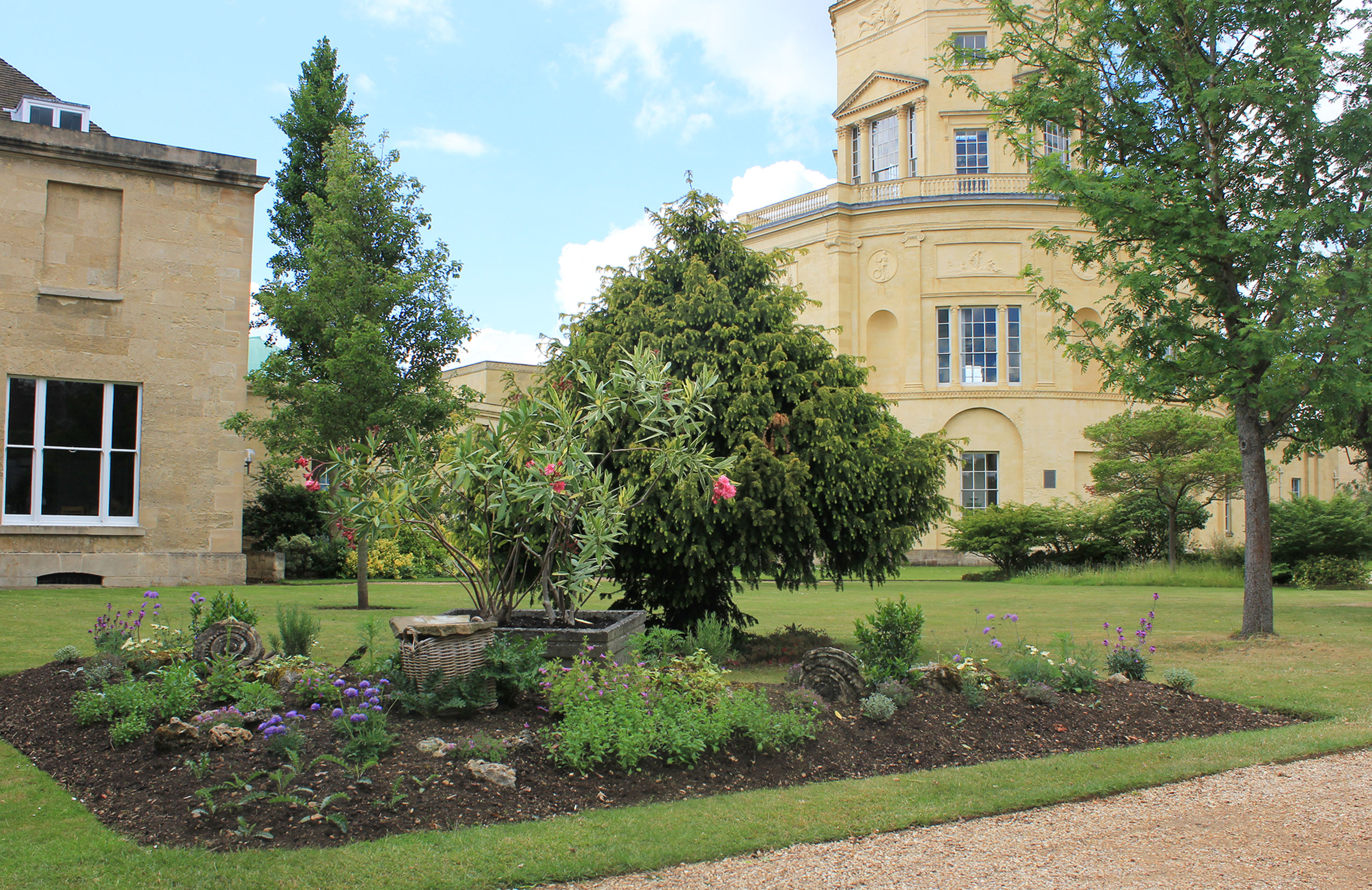 The main garden has a mature feel about it now, from having been planted up with quite a large number of trees and shrubs over the past 40 years. I used to boast that I had planted over 40 trees in the gardens as a whole, but as it has been necessary to remove some of them, through death, inconvenience or lack of aesthetic quality, I prefer to say that a nice ratio of trees to open space has been achieved. The main lawn is reserved for events, under normal circumstances, and to allow the historic weather station to operate effectively.

The completion of renovations to the Observatory in 2014 led to two birches, which had been planted in the 1980s for Sir Richard and Joan Doll, being replaced by a narrower weeping variety (betula pendula tristis) to open up a view of the building. They were planted by Professor Denise Lievesley and Roland Rosner in March 2016. 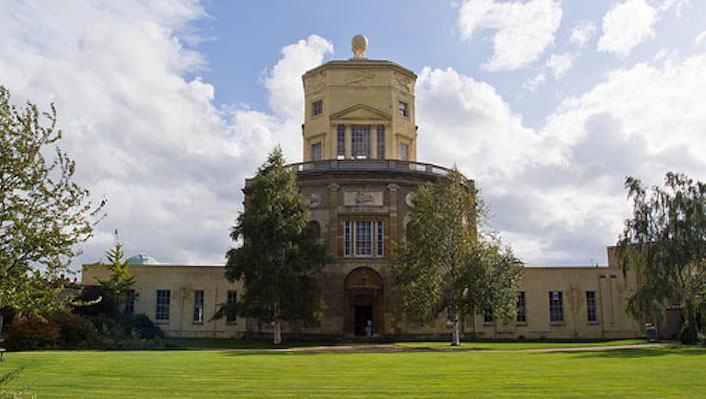 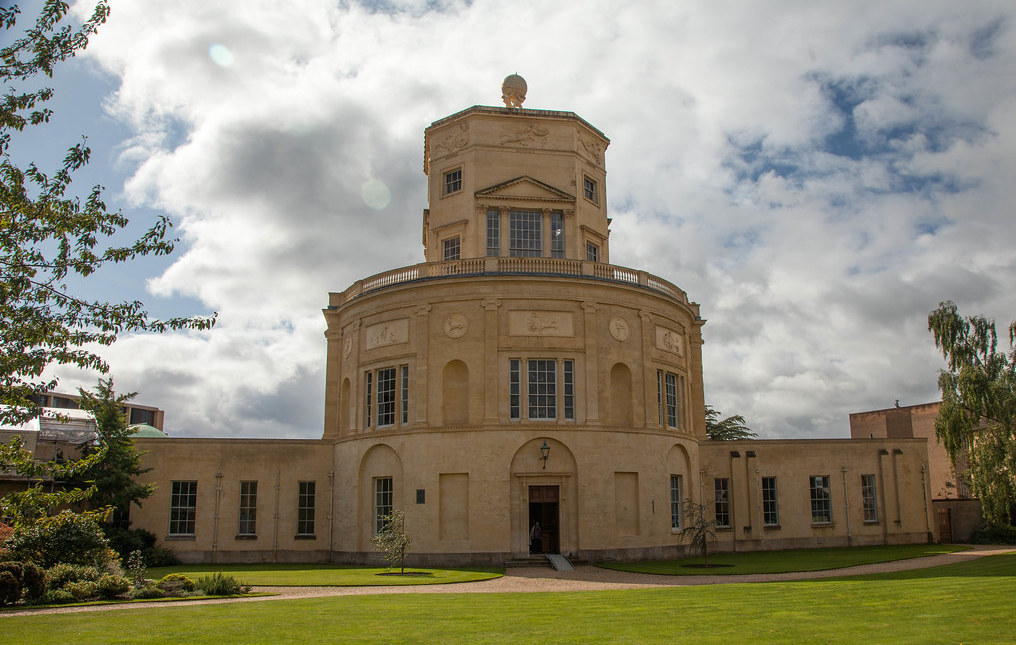 Before leaving the main garden I should mention the medicinal garden, which was created with the expert pharmacological assistance of Dr Jeff Aronson in 1984, and has been subject to modification according to recent discoveries (and persistent difficulties in growing some of the subjects). The seat canopy I designed on a scrap of paper and constructed from garden trellis and tree stakes. 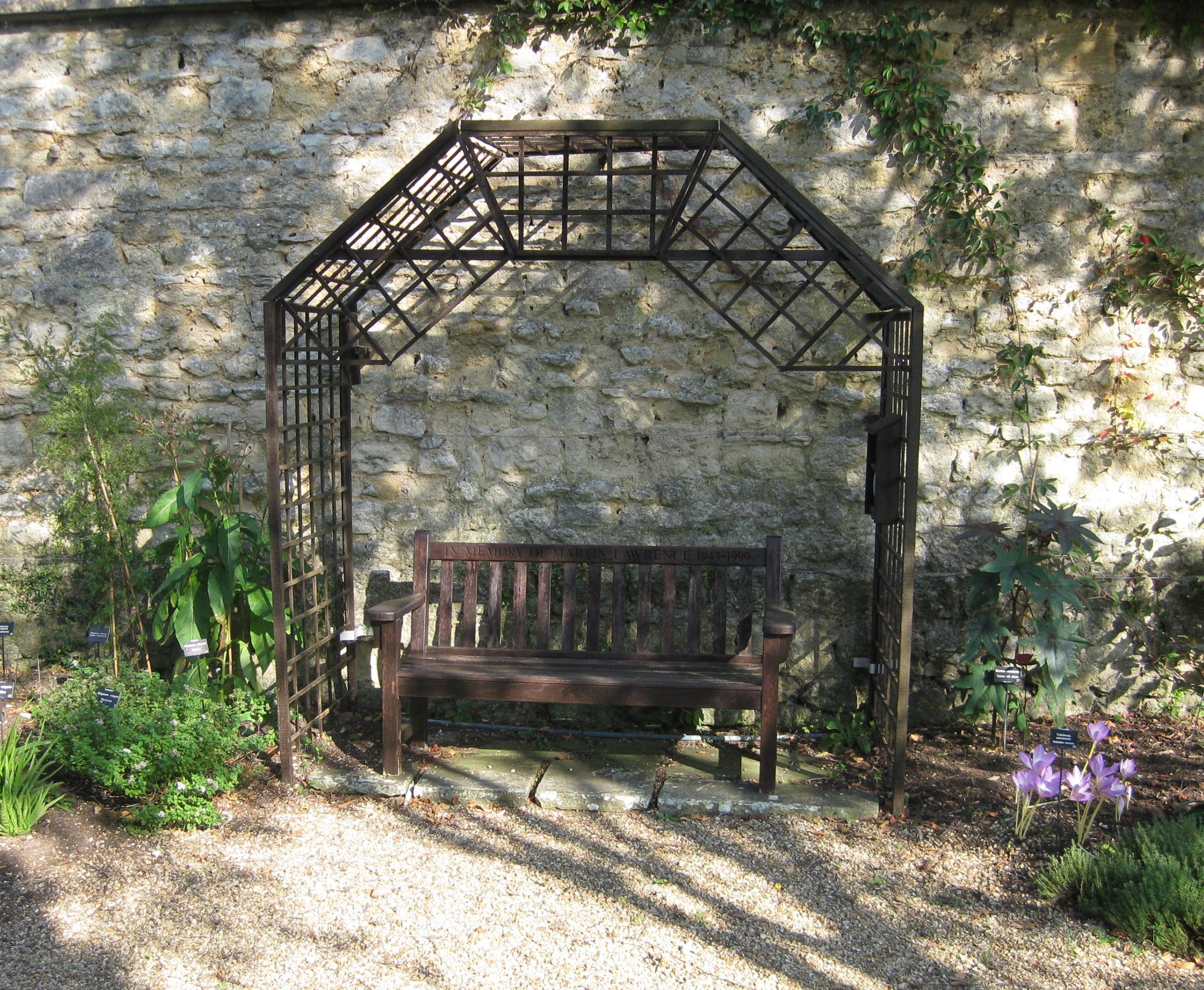 The south lawn of the Observatory feels slightly cut off from the college grounds, from being outside its enclosures, but it provides the setting for the main façade of the building and more recently has become significant as the focal point of the Radcliffe Observatory Quarter (ROQ). To the cedar of Lebanon planted in 1982 has recently been added a partner tree in 2016. They in turn have been joined by the sculpture by Martin Jennings FRSS of Dr John Radcliffe in 2018, looking very pleased with his benefaction and himself. 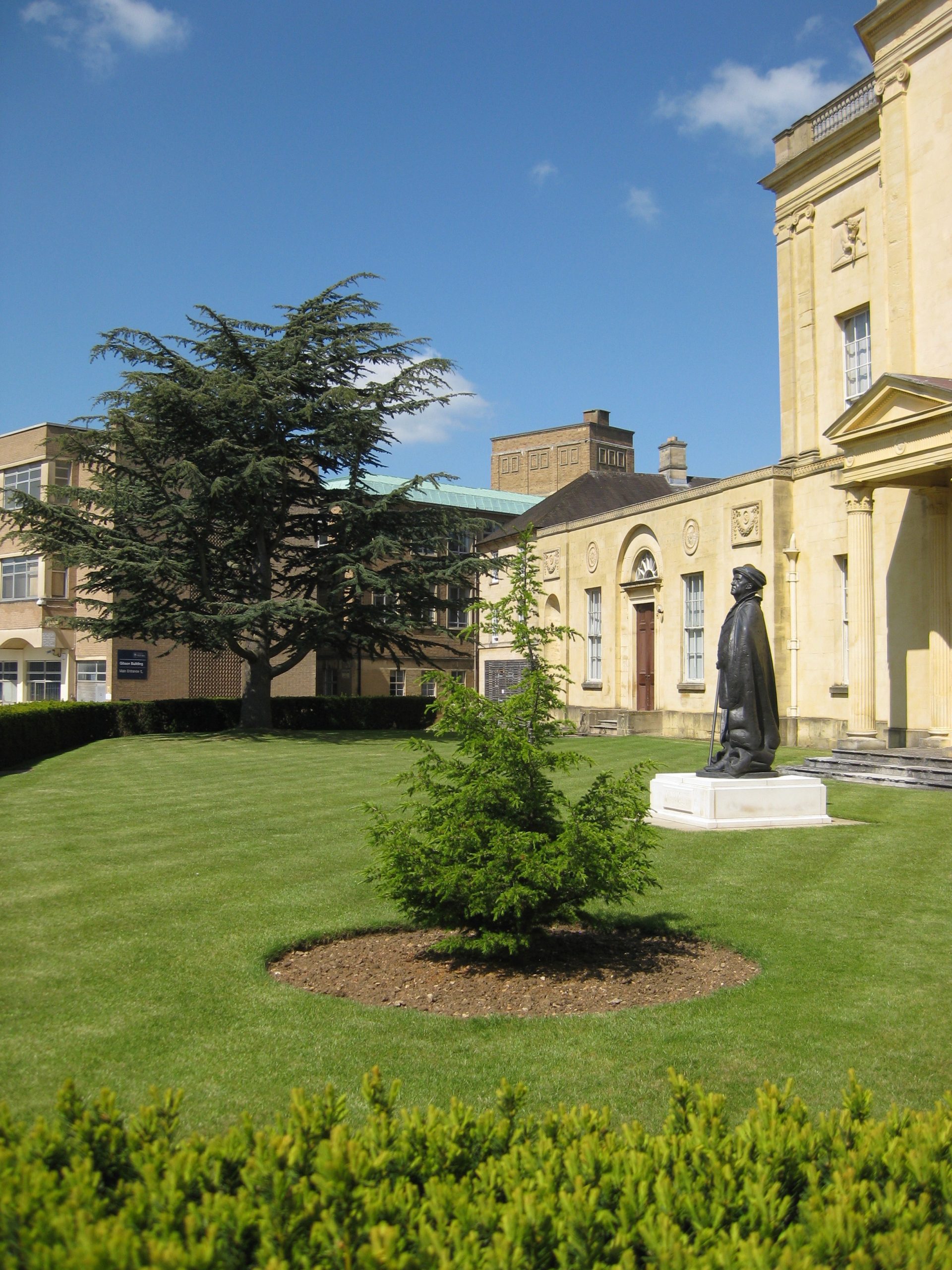 It is important that the new Stephen A. Schwarzman Centre for the Humanities should be brought into an harmonious designed relationship with the front of the Observatory.

We come round to the McAlpine Quadrangle, which was named after the construction company that built the Walton Building and New Block. This part of college has changed the most in the past 40 years. It used to have a desultory appearance, but the opportunity to transform it into a respectable quadrangle came with the completion of alterations to form the library in 2014.

As with the Lankester Quadrangle some 20 years earlier I submitted a series of plans for consideration, on nothing larger than an A4 sheet of paper. These two, from February 2013 and April 2014, represent the ‘before’ and ‘after’:

Considering that I used to refer to the quadrangle somewhat tactlessly as a secondary area to former Principal Sir David Watson, whose office is in Observer’s House, I hope he would be pleased with the result as you see it now. 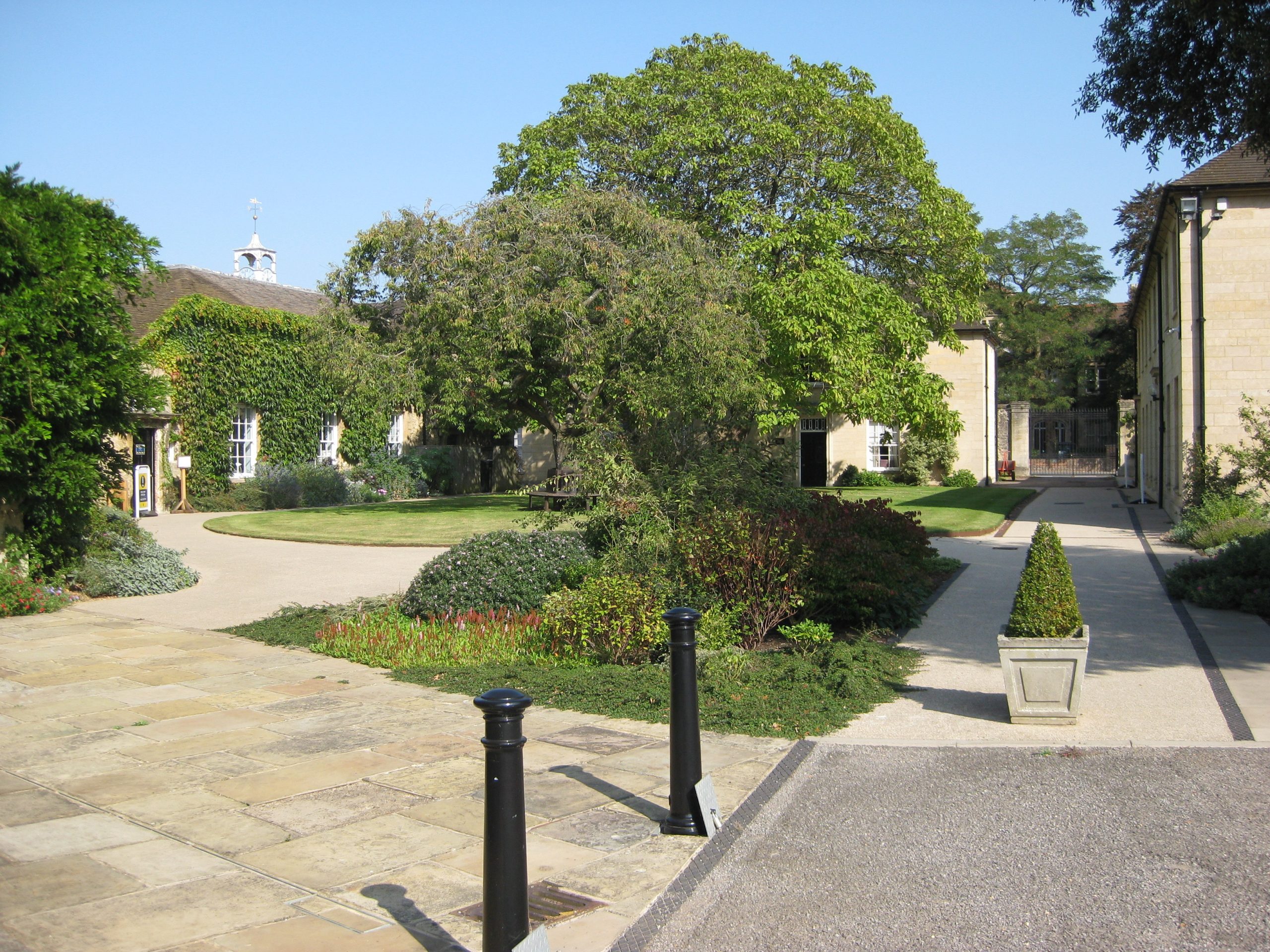 I cannot finish without mentioning those senior members of college who, as Garden Committee chairmen and Garden Fellows, have strongly supported my work throughout, and acted as intermediaries to the Governing Body: Brian Bower, Michael Kettlewell, Andrew Markus, Stephen Harris, Ingrid Lunt and Marella de Bruijn.

A conversation with Michael Pirie

As part of Giving Day 2021, Head Gardener Michael Pirie discussed his career and the evolution of the college gardens in conversation with Garden Fellow Marella de Bruijn.

There is a medicinal and herb garden situated in the gardens opposite the Radcliffe Observatory. Originally seen as necessary adjuncts to medical studies, physic gardens became sidelined by the advent of scientific pharmacology and the synthesizing of drugs, but the use of plants as a valuable resource in the search for beneficial treatments has renewed in recent years.

Medicinal plants in the garden include Digitalis purpurea (purple foxglove), containing the cardiac glycoside digitoxin which is used to slow and strengthen the heart rate, and Atropa belladonna (deadly nightshade) containing the alkaloids hyoscyamine and atropine, used in contrast to speed the heart rate. Poisonous plants include Conium maculatum (hemlock) and Ricinus communis (castor oil plant) used to despatch Socrates and Gyorgy Markov respectively. Of benign use exclusively is Camellia sinensis (tea plant).

The area occupying the north-east corner of the main site was originally the kitchen garden of the Radcliffe Observatory, as is evidenced by the surviving ancient mulberry tree in the middle. Although the walled enclosure is given over largely to tennis and squash courts now, the gardens still provide a quiet retreat for college members.

On the main lawn to the north of the Observatory is the Radcliffe Meteorological Station, where weather readings are taken daily by a member of Oxford University’s School of Geography. The important continuous historical records that began in 1815 are thereby maintained. The weather station was previously located on the south side of the Observatory.

The weather station in 1929 (courtesy the Topical Press Agency)