The Green Templeton 24 hour play returns with odysseys and oddities

The Green Templeton 24 hour play, an event in which a play is thought up, mapped out, written, rehearsed and performed all in 24 hours, returned for its third year last weekend, with entertaining results. Green Templeton alumnus Alastair Cockburn (Medicine – Graduate Entry, 2014-2018) gives an overview of the event:

This is a play you start writing at 8pm on Friday night and perform to an audience 24 hours later, 8pm on Saturday night.

As far as college records show, this is Green Templeton’s 3rd 24 hour play. The previous two were borne out of youthful enthusiasm, but this from the desperation of a group of current and former students who had failed to write a single word for a proposed Edinburgh Fringe show this summer.

To prevent performers arriving with a pre-written play, we ask someone to jot down some ideas – they can be characters, morals, places, props, lines, anything – that are revealed at 8pm on Friday and must be included in the play. As the main reason for the play was the absence of a pre-written play, this stage felt a little indulgent. Nonetheless, having something is usually better than having nothing. Infectious diseases notwithstanding.

It fell once more to Green Templeton’s Marquis of Mavericks, a man rumoured to have written a book about several weeks he spent dressed up as an ordinary person, Professor Charles Foster, to provide these prompts.

In addition to his usual cornucopia of Bee cults, impacted anal glands and places that died out with a classical education (should we sue our university if we didn’t know when, or what the Byzantine Empire was?), a particularly mischievous mood had taken Professor Foster as the prompts demanded our leading woman and man be called Denizio Lievesiopolou and Rolando Rosnerio. It took just 14 hours for us to spot the connection to Green Templeton’s decision makers, and just 3 further hours to plan suitable ways to distance ourselves from any connection with the play should the finished product miss it’s mark.

From chaos and confusion, a story evolved. We followed Denise, a bootsy statistician distraught after her exile from Greece, on an Odyssey to unlock the secrets she is sure are hidden in a 10th century, incomplete, 15-year doctoral thesis. These secrets will return Greece to prosperity and her to her homeland. In a paltry attempt at revenge by the writers, along the way she meets Charles Foster chairing an alternative lifestyle conference at Green Templeton College.

A few bits of poetic license were taken, an abattoir became an office for an Abbot, Roland was out-sung by an Italian sea-dog and Green Templeton’s bar became a crowded place where people could buy alcohol.

Sound effects were sourced, songs written, lights dimmed and brightened, props assembled and a play emerged. Much to everyone’s surprise, so did an audience! At least 3 of whom were not blood relatives of the cast. Most of the fun in a day like this comes from creating the play, but I hope the audience enjoyed themselves too.

Huge thanks to everyone involved. People have all sorts of talents they could be putting to any number of uses on a Saturday in November. It’s wonderful that they chose to spend it thinking of puns about haemorrhoids and economics (yes, yes, we got D’Arse Capital).

Star of the show was undoubtedly 12-year old Yarden Benyamin, (for the 3rd 24-hour play in succession),the acting was carried by Manu Gupta and the play lit up by music from Stephen Lezak and Tomek Dobrzycki. They wrote and performed with the rest of the team – Toby Phillips, Koot Kotze, Dylan Barry, Kelsey Stewart, Fahd Baig, Grace Blackman, Zineb Bentounsi, Neora Alterman, Peter Hurtubise and Alastair Cockburn. Huge thanks to Charles Foster.

Come along to partake or watch the next one! And get in touch if interested in our 2020 Fringe show!

Never thought I would hear such a frank discussion of racism and whiteness and it’s impact on medical education and our health @UniofOxford.

Thank you @greentempleton and the brilliant speakers. It’s time for action. https://t.co/CnBiQvYAWq

Exploring those facing poverty and prejudice - @greentempleton student @SamRitholtz (DPhil International Development) writes in the @newhumanitarian on the particular challenges faced by the LGBTIQ community during the pandemic.

Learn about the future of value-based #healthcare in this webinar co-hosted by @greentempleton, as part of a joint initiative with David Eccles @UBusiness School at @UUtah. 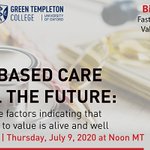