The college welcomed visitors for Open Doors on Sunday 15 September

The college was open to members of the public on Sunday 15 September from 11:00 to 16:00 as part of the annual celebration organised by Oxford Preservation Trust in partnership with the University of Oxford.

More than 1,200 visitors came to college for Open Doors

On a beautifully sunny day, visitors flocked to college for their chance to visit the iconic 18th century Radcliffe Observatory, situated at the heart of our three-acre site.

The Radcliffe Observatory was a popular attraction

They learned about the history of the building, which functioned as a working observatory from 1773 until 1934, and climbed the Tower of the Winds to admire the picturesque views over Oxford.

Visitors were thrilled to view the stunning Tower of the Winds

Visitors also had the opportunity to view the Radcliffe Meteorological Station, located next to the Observatory, which has records dating back to 1767. The station possesses the longest-running record of temperature and rainfall data for a single site in Britain, running continuously from 1813.

The Radcliffe Meteorological Station has records dating back to 1767

James King, a DPhil student in the Climate Research Lab, gave popular talks throughout the day about his role as an Observer, responsible for daily readings and maintaining the weather station’s records.

James King, an Observer, gave fascinating talks during the day

The college’s property at 13 Norham Gardens, a few minutes’ walk from the main college site, was also open to the public during open tours.

The beautiful Grade II listed building is the former home of Sir William Osler, Regius Professor of Medicine at the University of Oxford, and is now used as a conference centre and home to the Reuters Institute for the Study of Journalism.

Thank you to everyone who visited us during Open Doors – it was wonderful to see so many people and we look forward to welcoming you back next year!

Coming up this Thursday, 19:00 UK time, join us online for 'Insights into Value-Based Healthcare' with Mike Leavitt, run in collaboration with @greentempleton as part of a joint initiative with David Eccles School of Business @UBusiness at the University of Utah @UUtah.

#Openaccess is key for clinical trials transparency. I was pleased to describe the progress of #pharma companies and the good work of #OpenPharma at the @greentempleton Virtual Symposium today. Sign the @_OpenPharma position statement on open access here: https://t.co/AphQVIaeoT 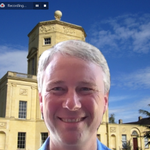 At 11.45 BST tomorrow (Friday) I'll be giving a short lecture/seminar on international differences in masking policies. Sign up here. It's part of a wider seminar programme @greentempleton https://t.co/9jqEG2o57k