The first of the three lectures in the 2022 series of Green Templeton Lectures was held in the EP Abraham Lecture Theatre on Thursday 3 February before a capacity in-person audience with several distinguished guests, and an online viewing contingent of several hundred participants.

The evening’s guest lecturer was Wolfgang Blau, former visiting Research Fellow at the Reuters Institute for the Study of Journalism, whose long and remarkable career has included serving as President, International and Chief Operating Officer of Condé Nast, Executive Director of Digital Strategy for the Guardian, Editor-in-Chief for ZEIT Online, and reporting on Silicon Valley for DIE WELT and ZDF. He is an advisor to the United Nations Framework Convention on Climate Change, a Trustee of the Ellen MacArthur Foundation, and co-founder, together with Meera Selva, of the recently-founded Oxford Climate Journalism Network. The evening was opened by Dr Rebecca Surender, Vice Principal of Green Templeton College. Associate Fellow Meera Selva, Deputy Director of the Reuters Institute for the Study of Journalism, introduced the evening’s guest speaker.

Wolfgang Blau’s lecture, entitled ‘Climate change: journalism’s greatest challenge’ opened with a reference to the soon-to-be-published climate change report from the IPCC on the impacts of climate change, to be followed in March by the IPCC report on possible mitigation measures; this in turn will be followed in September by the IPCC’s main Summary Report. As these reports are published only every six to seven years, 2022 will be a big and significant year in climate change, and ought therefore to be important for climate change journalism. November, however, is also the date for the US mid-term elections. The US, already (after China) the world’s second-largest emitter by tonnage of greenhouse gases, is also home to vociferous and well-publicised climate-change denial groups, many of which carry considerable political weight. Furthermore, the US spends more on Research and Development than any other country; these elections are therefore of great significance for climate change. 2022 will also see the COP 27 conference, which unfortunately begins just one day before the US elections, and will thus have to compete for media attention.

Wolfgang Blau’s research centres on seeking solutions to today’s practical challenges in the newsroom. In the course of extensive closed-door workshops which he leads for news organisations, he has encountered many encouraging tendencies, such as newly-developed climate desks, with augmented resources for reporting salient issues, but also a widespread frustration among climate reporters with organisational impediments, and public impact seen as disappointing when compared with their aspirations. Newsroom managers need to be aware of the systemic issues and levers which affect climate change coverage. Mr Blau underlined the important difference between ‘Climate Crisis’ (a temporary condition) and ‘Climate Change’ (an unprecedentedly vast, evolving catastrophic phenomenon, which is so enormous that it even defies our attempts at nomenclature, and which will rapidly change every aspect of life on our planet). He noted the urgency of transforming the world’s energy supply from fossil fuel to renewables, with concomitant resulting social, geopolitical and economic crises, and pointed out the inherent frustration for news organisations in trying to communicate climate science (and COVID science) against a background of ubiquitous disinformation, and such entrenched human behaviours as denial and avoidance. Both of the latter are deep-rooted and prejudicial behaviour patterns, requiring much time, effort and empathy to combat. Time, as he repeatedly stressed, is alarmingly short.

According to multiple international surveys, concern over climate change appears paradoxically greater among world leaders and populations (especially among young people) than it does in newsrooms. Mr Blau illustrated the intensity of this feeling among leaders with a quote from the UN Secretary-General António Guterres: ‘We are on the verge of the abyss’. This, he underlined, was a truly momentous pronouncement from so significant a figure on the world stage.

To cope with these rapid developments, journalism needs radically to upscale and reconceptualise itself and its function(s). For Mr Blau, problematic issues can be categorised under the headings, Operational, Cultural and Ethical, which may (or may not) be resolved, but usually with difficulty and expense.

Among Mr Blau’s cultural issues were ‘Silofication’, (inter-desk rivalry within news organisations), vulnerable mental health of staff in need of peer-group support, the ethical dilemma of ‘Solutions Journalism’ (influenced by the desire to protect and reassure audiences by offering facile ostensible ‘solutions’ to intractable problems). The situation is, as he pointed out, urgent, and we are running out of time. By its nature, journalism is, however, ‘a retrospective activity’. On the other hand, to propose, assess and implement urgently necessary climate change mitigations is, by definition, about reaching decades ahead into the future.

Mr Blau cited the problems of ‘False Balance’ (the chalk-and-cheese comparison of non-equivalent modifiers in the interests of frequently bogus journalistic ‘fairness’), fear among staff of potential and career-threatening accusations of activism, news value criteria in climate change (including recency, geographic vicinity, non-ambiguity, public interest and other factors). He argues for greater collaboration within and among news organisations. This requires enhanced climate literacy in all reporting, opening extensive career opportunities.

To rousing applause, Mr Blau concluded his talk on an optimistic note: ‘I believe we, humanity, can make this transition. But, I think it will be a very bumpy ride, and not as orderly as we hope for… I am now more optimistic, though, than I have been…’

The next Green Templeton Lectures in the series will be on Thursday 10 February at 17:30 (when the eminent Indian journalist, Bharka Dutt, presents Hell and back: On the road with the pandemic. What the virus taught us about equality, freedom and journalism) and on Thursday 17 February at 17:30 (when Sir Charles Godfray, Director of the Oxford Martin School and Professor of Population Biology will deliver his lecture, What does it mean to be an honest broker?).

📸 We love this image of the Observatory taken at dusk yesterday by GTC student Claire Hao https://t.co/FdLtMHOe29 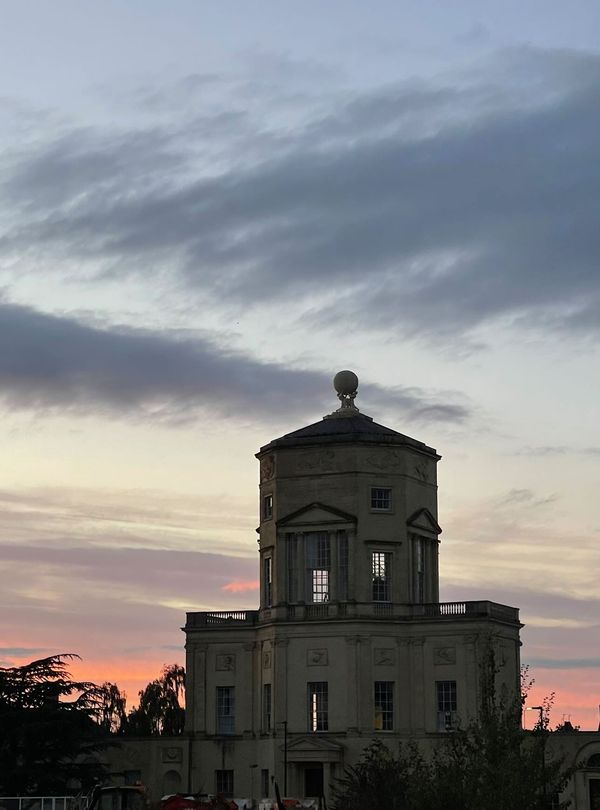 Research Fellow @AkshayMangla explains the findings from his recent research paper, in an op-ed for the Hindustan Times. https://t.co/XjhMD1CWUQ